The hidden coves of Malaga 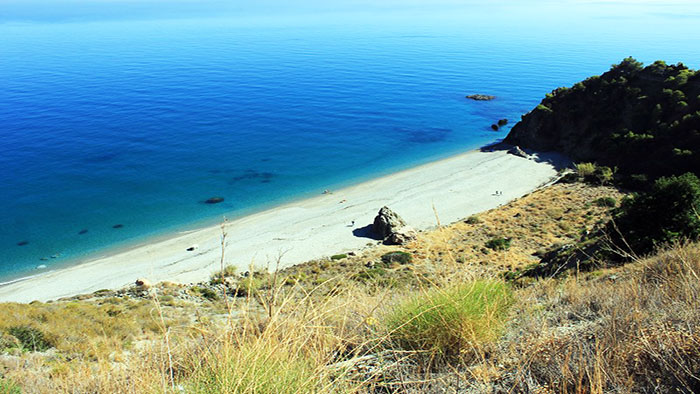 In other post of the Malaka Turismo we have told you which are the best beaches of the Costa del Sol. And although it is possible to find beaches with less affluence of tourists and neighbors in the 184 km of coastline that holds the Costa del Sol, we can curl even more curl and look for the most hidden coves of Malaga province.

These hidden coves in Malaga will not always have all the services that other more frequented beaches on the Costa del Sol may have, so let’s take the day as if it were a nice picnic with family or friends and get ready to relax in these beautiful places.

The cove of El Pino (Nerja)

This small cove of fine sand that is located in Nerja (a town bordering the province of Granada), has two small beaches separated by some rocks that we can cross without problems on foot.

We continue in the easternmost part of the Costa of Malaga to find one of the best hidden coves in Malaga, the cove of Cañuelo, which borders the province of Granada by the Natural Park of Maro -Cerro Gordo and is about 350 meters long.

Its difficult access makes it little frequented by tourists so it is perfect if you are looking for tranquility and relaxation in fusion with nature. Its clean and calm waters are perfect for water sports such as snorkeling, with which we can discover its beautiful surrounding rocks and precious coral species such as orange coral.

We moved from Nerja to the vicinity of Malaga City and the beaches of El Palo, to find one of those hidden corners “only for connoisseurs. We talk about the Peñón del Cuervo, a beach named after a rocky formation that reminds us of this bird.

Without a doubt, one of its greatest attractions is the number of picnic areas and barbecues that this cove has, where hundreds of Malaga residents come to spend the day when the good temperatures begin. During the summer, concerts or open-air activities are usually organised, making it a good option for spending the day with the family.

Very different from the tourist beach of Bil Bil is the Beach of the Viborillas of Benalmádena. Formed by different coves and surrounded by exuberant vegetation that makes it one of the most beautiful beaches on the Costa del Sol, this space of about 100 meters in length is ideal for relaxation and diving lovers.

This cove, despite being further away from the tourist area of Benalmádena, has a restaurant in the upper part of the cliff, which has the best of Malaga’s cuisine such as fried fish or espetos (grilled sardines). Without a doubt, one of the best options to get to know the best hidden coves in Malaga.

As its name suggests, this is one of the smallest beaches in Malaga, only 50 metres long and 15 metres wide. It is easily accessible and has parking, showers and other services nearby.

The great charm of this beach is that we can take a bath while we observe the small Lighthouse that delimits it and the archaeological remains of the Roman villa of Clavicum that dates from the second century A.D. and that are close to the shore.

Throughout the following posts we will tell you more about different hidden coves in Malaga that are scattered all over its coasts. Remember: although we are in one of the most touristic places of the Spanish geography, it is possible to escape from the crowds, prepare a good picnic, and enjoy a perfect day at the beach with family or friends.