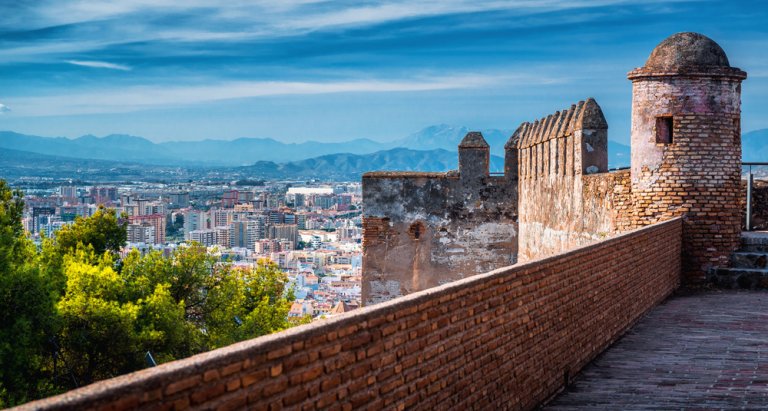 When we reach the centre of Malaga, we will see the imposing silhouette of one of its main emblems. We are talking about Gibralfaro Castle. It is undoubtedly one of the symbols of all the people of Malaga, along with the “Cenachero“, the “biznaga” and the “espeto“.

This fortress of Nasrid origin, which dates from the 14th century, had as its main objective the defence of the Alcazaba which lies at its foot. It gets its name from the fact that it is located at the top of what was known as Jabal-Faruk, which could be translated as ‘lighthouse mountain’.

However, the history of Gibralfaro Castle goes back a long way. During the first centuries of the first millennium it was also used as a defensive fortress by the Phoenicians and Romans thanks to its strategic defensive position. It was the Arabs who, for the first time, converted it into a settlement with elite troops under King Yusuf I in 1340.

The next milestone for the fortress came after the conquest for the Catholic kingdom of Castile in 1487. Fernando of Aragon took possession of Gibralfaro Castle as a temporary residence and gave it the honour of forming part of the coat of arms of the city of Malaga to the present day. He also added the famous initials of TM to its emblem ‘Tanto Monta‘.

After the reconquest by the Catholic Monarchs, the Gibralfaro Castle gradually lost some of its Moorish architectural elements, such as the mosque and other administrative buildings.

The fortress was considered to be the most impregnable in the whole of Iberia thanks to its elevated position and its intelligent defensive architecture, with two lines of very thick walls that would make it difficult for any army to attack and up to eight watchtowers and defence towers. In addition to this first obstacle, there is a series of zigzag-shaped walls that make assault difficult and which link the Alcazaba with the castle in a long, narrow corridor.

Gibralfaro Castle can be divided into two distinct sections. The first, in the upper part of the fortress, which has been called the main courtyard. From here rises the 17-metre high main tower and we find what is perhaps the oldest historical vestige in Malaga: the well of Airón.

According to specialists, this 36-metre deep well dates back to the Phoenician period and was the main source of water supply for the city for centuries. In this space we can also find the Interpretation Centre of the site, which will teach us more about the history of this site over the centuries.

The second section corresponds to the lower area that served as a practice area for the army and where the barracks for the troops were located. In this area were the armoury, the stables and the famous White Tower, which still has a water cistern inside.

Nowadays, it is one of the most visited tourist attractions in the city of Malaga, with incredible views of the city and the bay from its top. On the outskirts of the castle is the Parador de Málaga, which dates back to 1948 with 38 rooms, 2 suites and a swimming pool.

As we have already mentioned, we can find the Gibralfaro Castle Interpretation Centre, where we can learn more about the history of the Nasrid fortress, its later extensions and see some weapons and instruments from the 16th century on display.

HOW TO GET TO GIBRALFARO CASTLE

Getting to Gibralfaro Castle is not complicated and we can reach the entrance by taking a short walk to the top. Although in summer, with high temperatures, it can be a bit tiring, it is only about 20 minutes at a brisk pace from the Alcazaba to the castle.

However, if you prefer a more comfortable alternative, there is the possibility of reaching the top of the fortress by public bus, taking Line 35, which leaves from Malaga Park.

CAN I DRIVE TO THE FORTRESS?

Of course, the top of Gibralfaro has a car park to accommodate the arrival of the tourist buses and of course, the private cars that want to visit the fortress.

We recommend the joint Alcazaba – Gibralfaro Castle visit, priced at 5,50 €.

WHERE CAN I BUY THE ENTRANCE TICKET TO GIBRALFARO CASTLE?

Our recommendation is to visit the Alcazaba first, which has a lift entrance just behind the Town Hall (in Malaga Park). At the same entrance you can buy a joint ticket to see the Alcazaba and the castle. There is no direct connection between the two tourist attractions, so after visiting the Alcazaba, you can visit the Castle and the Alcazaba.