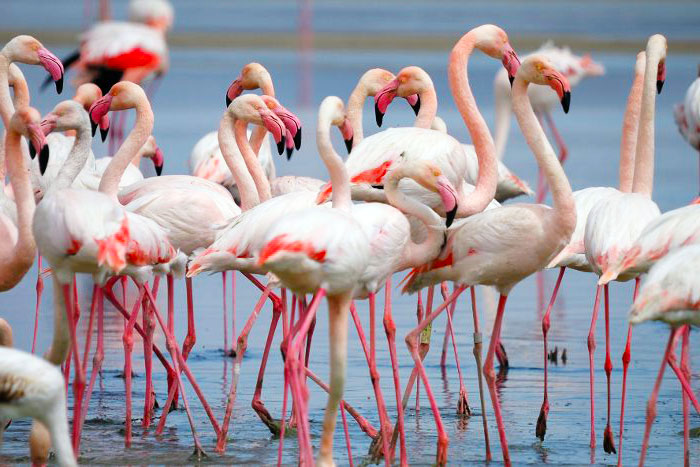 We are used to hearing that the province of Malaga is the ideal destination for lovers of sun and beach tourism. However, in the Laguna de Fuente de Piedra Nature Reserve, we will find a real paradise for nature and bird watching lovers.

Located in the northwest of the province of Malaga, this natural enclave is the most extensive reserve in Andalusia and one of the most characteristic Mediterranean wetlands in Europe due to its incredible ecological value.

In its 1,400 hectares, 6.5 km long and up to 2.5 km wide, lives the most important colony of flamingos in the Iberian Peninsula and the second largest in Europe (only surpassed by Camarque, in France).

Laguna Fuente de Piedra forms part of the lagoons in the Antequera area, which make up a total of 3,000 hectares of wetlands. In terms of flora and fauna, there is a wide variety of vegetation typical of these spaces and a great variety of water birds that inhabit the area during the nesting period between March and July.

In terms of vegetation, the Laguna de Fuente de Piedra has the characteristic flora of this type of Mediterranean wetland with clayey soil. Thus, we can find plants such as the sosa de las salinas or the alacranera.

In the interior of the lagoon there are islets that can occupy important extensions and that are fundamental for the mating and reproduction of some bird species.

In the vicinity of the lagoon we can also find other typical Mediterranean species such as almond trees, holm oaks, hawthorn, as well as mandrakes, poppies, orchids and mallows.

THE IMPORTANCE OF SALT

Its waters are recharged by rainfall, in addition to the collaboration of the Santillán and El Humilladero streams. To this should be added the flow from a nearby aquifer. Historically, the Laguna Fuente de Piedra has been very important due to its saline properties. This, together with the aforementioned birdlife, led to the settlement of many villages in the area.

The evaporation of the water in spring favours the crystallisation of the salt, which has been used for trade since ancient times, with the Roman Empire making the most of it until almost the middle of the last century.

In summer, this phenomenon meant that the salt curdled naturally, which favoured extraction without the need to create a parallel industry. The Antequera area has benefited from this resource throughout history and the passage of practically all cultures.

The vegetation that grows on the shores is adapted to salinity and is known as halophilic. Some of these plants are reeds, rushes, reeds and the classic Mediterranean scrub, of great botanical value.

Although the Laguna Fuente de Piedra is a beautiful place to stroll and relax, one of its great tourist attractions is bird watching. Throughout the year up to 170 species of birds pass through this natural enclave. On its shores 20,000 breeding pairs of flamingos have been counted.

According to experts, the best time of year to observe these birds is spring, especially in the early morning. It is therefore advisable to bring a good pair of binoculars, comfortable clothing, waterproof footwear and a cap or hat.

Likewise, in order to encourage bird watching, some viewpoints have been built in the lagoon, such as Las Vicarias and La Madriguera. In turn, the Laguneto and Las Albinas paths have been prepared for this purpose. There are also small lagoons such as Cantarranas.

HOW TO GET TO LAGUNA FUENTE DE PIEDRA

If you are staying in the city of Malaga, you should know that La Laguna is close to the town of Antequera, about 72 km away and about an hour’s drive. To get there, the main road is the A-92 motorway, taking exit 132.

There is also the option of travelling by bus with the ALSA company from Malaga bus station.

After visiting the lagoon, a good option would be to visit the small town of Fuente de Piedra, which is very close by. The name comes from a fountain in the Plaza de la Constitución which has curative properties thanks to its minerals.

The small village preserves beautiful Andalusian-style houses with wrought iron balconies. Also of note is the 19th century neoclassical building of the “Palacio de la Marquesa”, which was the summer residence of the Counts of Castillejo del Tajo.

On this walk you can have a coffee, savour some of the delicious local cuisine or buy the olive oil produced in the fields. Some traditional dishes are migas (fried breadcrumbs), chacinas (cold meats) or “porra antequerana”.

Between March and June, beans and asparagus in season can be used in many dishes.

A good option that is also available on arrival at Fuente de Piedra is cycle touring. Renting one of these vehicles will allow you to explore the ecosystem of the lagoon at your own pace along its paths and stop to breathe and observe all its beauty at its different viewpoints.

We remind all tourists to use common sense when visiting this protected site, not littering or feeding the animals in the area.