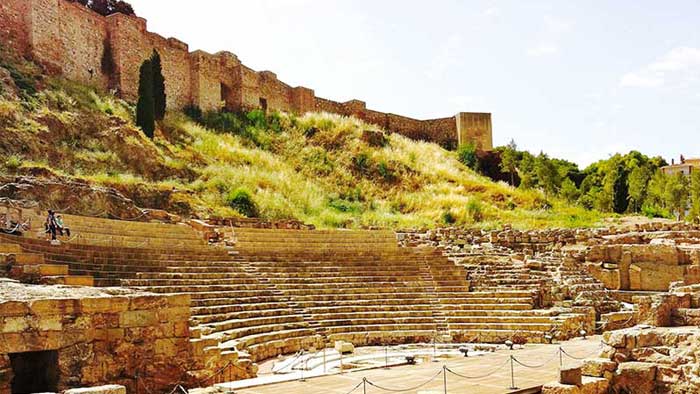 In the previous post we told you that one of the most recognisable postcards of the city of Malaga is the Gibralfaro Castle dominating its heights. On this occasion we would like to point out that this image could not be complete without the Arab Alcazaba and the Roman Theatre in the central Alcazabilla street.

In our post on the best free museums in Malaga we included the Alcazaba and the Theatre as art galleries although, although they cannot be considered museums as such, they do have a crucial importance in the city’s tourist itinerary and are open-air spaces that can be visited with their corresponding interpretation centres.

The Moorish Alcazaba of Malaga is linked to the Gibralfaro Castle by a long line of walls known as La Coracha, which served as a defensive barrier against invading armies.

The meaning of alcazaba in Arabic is ‘fortified walled enclosure’ and inside it there were barracks, prisons and administrative buildings.

The history of the Roman Theatre in Malaga is intimately linked to that of the Alcazaba, since, as well as being at the base of the city, it was used as a quarry for the construction of some parts of it.

Along the ascent to the Alcazaba (if we dare to make the climb from Calle Alcazabilla), we can discover small details that come from the theatre. The Arab builders selected and removed rocks, capitals and pieces of marble for its construction, which dates from between 1057 and 1063 AD.

HISTORY OF THE ALCAZABA OF MALAGA

As we have already mentioned, construction of the Alcazaba began between 1057 and 1063 AD under the rule of the Berber taifa king Badis, with his centre of power in Granada.

Later the Alcazaba continued to undergo a series of improvements to its infrastructure under the Almoravids (1092) and the Almohads (1146). But its Arab apogee came in 1279 after the Nasrid conquest by Muhammad II Ben al-Ahmar.

Typical of the taste for Nasrid beauty is the stately air between defensive fortress and palace, organising the space by rectangular courtyards and corridors that surround its gardens and ponds.

This architectural layout is reminiscent of works from Granada (such as the Alhambra), in which the spaces seek beauty, contemplation and the play of light and shadow in all the rooms.

It is from this period that we see the splendour of Arab culture in Malaga, which was made up of the medina, or walled area of the city; the suburbs that were expanding with the growth of the population; and the fortress-castle that dominated the mountain in a defensive manner.

After falling into relative oblivion in the centuries following the conquest of the city by Ferdinand the Catholic, the Alcazaba of Malaga has undergone some reconstructions, mostly in the last half of the 20th century, such as that of the architect Manzano Martos from 1970 onwards.

In those excavations we were able to discover some jewels that remained under the silence of the centuries, such as Roman concrete walls covered with reddish stucco, and even small pools dug in slate where the Romans prepared the typical garum (a fish paste that they used to accompany their meals).

A dungeon was also discovered where Roman captives, who worked as slaves in the fortress during the day, were locked up.

When you hear about a Roman theatre on the Iberian Peninsula, you probably squint your eyes and immediately think of the Roman Theatre of Mérida. What you may not know is that in the centre of Malaga there is a Roman theatre that is in a more than acceptable state of preservation.

The construction period practically coincides with that of the theatre in Extremadura, as the Roman Theatre of Malaga was ordered to be built during the reign of the Emperor Augustus in the 1st century AD.

This was the heyday of the theatre in the Roman Empire, since Augustus himself saw theatrical performances as a powerful means of propaganda to transmit the values of traditional Rome and the House of Julia.

By the 3rd century AD, the Roman Theatre of Malaga was losing its relevance until it was converted into a kind of market place, to end up resting in oblivion after the fall of the Empire.

HISTORY OF THE ROMAN THEATRE OF MALAGA

Strange as it may sound, the Roman theatre in Malaga was only discovered about 70 years ago. It wasn’t until 1951 that Roman ruins began to come to light, suggesting that underneath the Palace of Archives and Libraries was something really big.

It took a few more years – in the 1990s – to demolish what was left of the old Palace of Archives and leave the postcard that we can find today on the slopes of the Alcazaba and the Roman Theatre of Malaga.

It was then that the Alcazabilla street took shape and the theatre was adapted for the visitor. So much so, that at any time we can go to the popular bodega El Pimpi and have a tapa and a beer looking at the beautiful panorama that gives us the union of Roman and Arab culture.

WHAT TO SEE IN THE ROMAN THEATRE OF MALAGA

If you are familiar with the architecture of a classical theatre, you will be able to distinguish the main elements of the Roman Theatre in Malaga.

In the foreground we find the stage or Proscaenium, where the play is performed and the actors – who usually wander around wearing masks and accompanied by a chorus. The stage was usually made of wood to hide underneath the scenery or mechanical elements that could be used as a resource (see Deus ex Machina).

At the foot of the stage is the Orchestra, a semi-circle of noble material such as marble in which the authorities sat in comfortable seats. Here was an altar to honour Dionysus (god of fertility and wine).

When you look up you will see the Cavea, which is 31 metres wide and 16 metres high. The cavea in Roman theatres is semicircular, providing better acoustics for the audience. The audience was usually seated at different heights depending on their social position: the plebs sat in the ima cavea and media cavea, while the patricians usually occupied the summa cavea.

INTERPRETATION CENTRE OF THE ROMAN THEATRE OF MALAGA

Right next to the Roman ruins we can find the Interpretation Centre of the Roman Theatre of Malaga. Here we will learn a little more about the history of this unique enclave within Roman Hispania.

On entering we will be able to see a short video that narrates the process of the beginning of the construction of the Theatre and its functionalities over time. We will also discover some of the ceramics found in the area during the excavation and reconstruction work.

On the façade of this interpretation centre we can see a printed reproduction of the Lex Flavia Malacitana, also known as Lex Malacae, which is currently in the National Archaeological Museum of Madrid despite an express request from the city of Malaga to be returned to the city in 2016.

These five tablets contained the legal statutes that made the ancient Malaka a Roman city within the Empire, with full rights and powers. To this day the city of Malaga is still waiting for these tablets to be returned to it.

Admission to the Interpretation Centre of the Roman Theatre of Malaga is free.

Getting to Malaga’s Moorish Alcazaba and the Roman Theatre is very easy as both are located in the heart of the city’s tourist circuit, in the very heart of the city centre, very close to the Merced Square and the famous Cathedral.

Both monuments can be reached via Calle Alcazabilla. It is quite common to visit the Roman Theatre and walk on its steps, and then begin an ascent to the Alcazaba.

Tickets for the Alcazaba can also be purchased on Calle Guillén Sotelo (behind the Town Hall in the Parque de Málaga), at an entrance that leads to a direct lift. This lift is ideal for people with reduced mobility or the elderly.

HOW MUCH IS THE ENTRANCE FEE TO THE ALCAZABA?

Prices of the Alcazaba:

The opening times of the Alcazaba and the Roman Theatre in Malaga are:

These are the standard timetables, which may have changed due to COVID reasons.

With this information you will have a little incentive to get to know these two enigmatic and important monuments for the city of Malaga, the Alcazaba and the Roman Theatre, two jewels that rest one on top of the other and that are an inherent part of the greatness and splendour of the cultures that inhabited its streets. Stay tuned for more secrets about the historic centre.