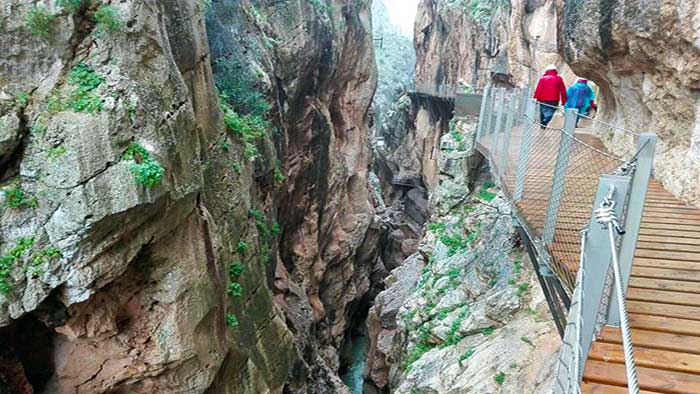 Although both spanish people and tourists associate Malaga with the famous beaches of the Costa del Sol, the truth is that just an hour’s drive from the capital, we can find the Caminito del Rey, a route not suitable for the faint-hearted.

Caminito del Rey, built over the Desfiladero de los Gaitanes, in the area of El Chorro, has for years attracted daring and adventurous people who have wanted to cross its paths over the sky (some of them with fatal consequences). Today it is a safe place and a must if you want to discover one of the most spectacular spots in the province of Malaga.

Undoubtedly what has made it popular with visitors is the striking image of footbridges that stand – almost magically – over 100 metres high, on an 8-kilometre route along narrow banks that are no more than 1 metre wide.

This path, which seems almost like something out of an adventure film, lulls us with the sound of the river at its feet. Caminito del Rey starts in the municipality of Ardales, passing through Antequera and ending in El Chorro, Alora.

Where does the name of the Caminito del Rey come from?

Although the mysterious aura of this path may remind us of romantic stories of ancient kings, the truth is that the Camino del Rey was a path for industrial purposes built by the Hydroelectric Society of the Chorro, which needed an access between the waterfalls of Gaitanejo and El Chorro for the passage of maintenance workers and the transport of materials.

The work was inaugurated in 1921 by King Alfonso XIII, who, in order to reach the Conde del Guadalhorce dam, crossed the footbridges that hung from the cliff. That is why from that moment on the locals knew the place as El Caminito del Rey, a name that is still used today.

The road, which began to be built between 1901 and 1905, started near the railway tracks and ran along the edge of the Desfiladero de los Gaitanes, facilitating passage between the two places. With the passing of time, a Civil War and the abandonment of the place, some daring inhabitants of the area used it to get around.

Later, adventurers and climbing fanatics saw the Caminito del Rey as a romantic, semi-abandoned place with missing handrail areas, destroyed pavement or patches looking into the void. The fame of being “one of the most dangerous places in the world”, also attracted several foolish tourists, who on some occasions (the last ones in 1999 and 2000) caused fatal accidents to four people.

After these unfortunate accidents, the Junta of Andalucía decided to close the initial section, thus preventing access to more visitors. It was in 2014 when the Provincial Council of Malaga decided to start a process of restoration of the Caminito del Rey, inaugurating the current path on 28 March 2015.

It is worth noting that in the area where the Caminito del Rey is located, there was human presence in the Neolithic period, with various evidence of archaeological sites having been found. The area was not taken into account until 1860, the year in which the Cordoba-Malaga railway was built, through which – curiously enough – trains still pass.

There is a tunnel running parallel to the Desfiladero de los Gaitanes which is 300 metres long (285 metres inside and 15 metres outside through the Hoy Valley). This tunnel serves as an alternative to the “aerial” route when weather conditions, such as wind or rain, prevent it from being used.

Is Caminito the del Rey dangerous?

The Caminito del Rey is located some distance from the centre of Malaga in a protected natural area. Walking along the walkways of its path is completely safe and it is accessible for children (over 8 years old), as well as for the elderly.

Only a helmet is required as a minimum safety measure, as the section through the gorge is rocky and small stones could fall out. Visitors will also be asked to wear suitable footwear, with the use of flip-flops or high-heeled shoes being prohibited. By the way! The use of selfie sticks is also prohibited for safety reasons.

You can see all these extended recommendations on the official website of the Caminito del Rey.

During the section along the walkways, visitors will find themselves at altitude (with walls up to 400 metres high), which can cause vertigo. If you suffer from vertigo, we recommend that you only look straight ahead during this time and on the way out. It’s really not too much – the views will be worth it!

If you plan to visit the Caminito del Rey in high season during the hot months (May to September), it is advisable to wear comfortable clothes (not too loose), sunscreen, wear a hat or cap, and of course, bring a bottle of water.

Tickets for the Caminito del Rey

(Temporarily closed due to the pandemic).

You can buy tickets for the Caminito del Rey through its website or get there through one of the organised tours that depart from the city of Malaga.

The journey takes approximately 2.5 hours, depending on the visitor’s fitness level, and runs in a linear fashion for almost 8 kilometres (7.7 km) from Ardales (north) to El Chorro (south).

As this is a linear route, if you have arrived by private transport, you can return to the car park in the northern area by taking a shuttle bus for 1.55 euros per person.

If you visit the city of Malaga or the Costa del Sol you cannot miss the Caminito del Rey, a magical enclave that also has Miocene sediments of different sedimentary structures, fossil remains of whales and sandstone formations taffoni type, wind erosions of beautiful shapes.

A natural wonder that will leave no one indifferent and which has recently been nominated as a UNESCO World Heritage Site.