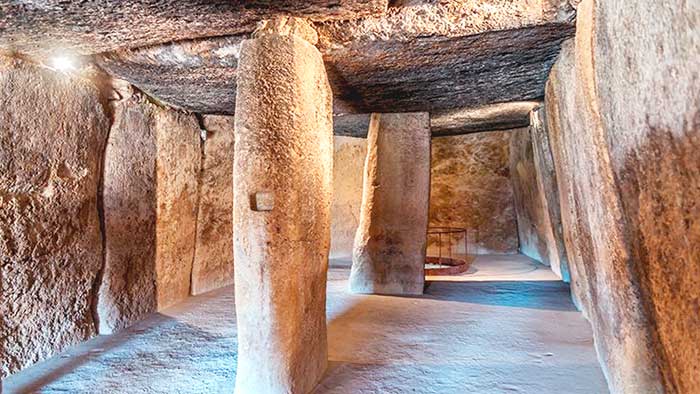 Malaga has everything you need to spend a family holiday and enjoy its incredible beaches together with the best of its gastronomy. However, what many do not know is that the province of Malaga is a natural paradise for lovers of inland tourism, with prehistoric jewels of the Neolithic period known as the Archaeological Ensemble of the Dolmens of Antequera.

This 6,500 year old Megalithic Necropolis consists of the monuments Dolmen de Menga, Dolmen de Viera and Tholos de El Romeral, recognised as some of the largest ensembles of these characteristics in Europe.

The good state of conservation and the richness of the surroundings of the Torcal of Antequera Natural Site, has made the Archaeological Ensemble of the Dolmens a Site of Cultural Interest and a UNESCO World Heritage Site in 2016.

This megalithic complex includes not only the three aforementioned dolmens, but also “La Peña de los Enamorados” and El Torcal of Antequera.

But before we start this post we are going to locate on the map where the beautiful Torcal of Antequera Natural Site is, just a few kilometres before the famous town of the same name of that famous saying “Salga el sol…” (Let the sun come out…).

HARMONY BETWEEN DOLMENS AND NATURE

The Dolmens of Antequera Archaeological Site is located about 55 minutes north of the city of Malaga. Located in the Natural Park of Torcal de Antequera, in a magical enclave of unparalleled rock formations and nearby mountains.

The main feature of the Archaeological Ensemble of the Dolmens of Antequera is that – unlike many of the dolmens around the world – they do not face the sun (with the exception of the Dolmen of Viera).

Rather, both the Menga Dolmen and the Tholos of El Romeral look towards the nearby mountains and rocky elevations. In this sense, it may remind us of pre-Hispanic cultures such as the Inca, who oriented their cities towards the “apus” or protective mountain deities.

In the case in question, while the Menga Dolmen was oriented towards the “Peña de los Enamorados” (a mountain that appears to have a human shape), the Tholos de El Romeral faces the sinuous rocky forms The Torcal of Antequera, in what is known as karstic relief, due to its weathering because of its water-soluble minerals.

The Dolmen of Menga is, in addition to being the oldest of the archaeological site at around 6,000 years old, the most impressive construction in terms of its size and architectural complexity for its time.

Access is through an entrance that leads to a gallery made up of stone slabs and blankets (covering the roof). For researchers, this construction may be one of the most important ritual tombs in the world from the Neolithic period.

The gallery has 10 large slabs, with five on each side of the gallery, the weight of the last slab being estimated at 180 tonnes.

The importance of this prehistoric monument led to it being declared a National Monument in 1886.

The Dolmen of Menga is followed in importance by the Dolmen of Viera. It is precisely because of the comparison with the first one that, after its discovery, it was called “Cueva Chica” (small cave), later renamed Viera, in honour of the brothers who discovered the monument..

The construction dates to between 3510 and 3020 BC. It is the only dolmen that does have a solar orientation to the equinoxes, which throughout antiquity marked the beginning of the sowing season and the onset of winter.

Also conceived as a sepulchre, it is built with orthostats and blankets in the upper area. It is only about 50 metres from the Dolmen de Menga, so it is very easy to move from one to the other quickly.

The Viera Dolmen was listed as a National Monument in 1923.

THE THOLOS OF EL ROMERAL

Within the Archaeological Ensemble of the Dolmens of Antequera, the Tholos of El Romeral is the most modern construction. It dates from between 3,000 and 2,200 BC.

As mentioned above, it is oriented towards the karstic forms of El Torcal de Antequera. Its particularity with respect to the archaeological complex is the approximation of its orthostat courses instead of large slabs when forming its dome.

This curious dolmen is located about 2 km from the dolmens of Menga and Viera, in the middle of the Menga dolmen and the “Peña de los Enamorados”. It has a gallery of about 25 metres with the main room being 5 metres in diameter. The Tholos of El Romeral has a second corridor that ends in a second, somewhat narrower chamber with a diameter of 2 metres.

TICKET PRICES OF THE DOLMENS OF ANTEQUERA

The good news is that access to the Archaeological Ensemble of the Dolmens of Antequera is free. As it is a natural site, all we have to do is follow a series of official recommendations and be respectful of the environment and the beautiful setting in which it is located.

Summer (16 June to 15 September): Tuesday to Sunday, public holidays and Mondays before public holidays, from 09:00 to 15:00. Mondays (not public holidays): closed. The museums and archaeological and monumental sites will be open on all public holidays, including local holidays, with the exception of 1 and 6 January, 1 May and 24, 25 and 31 December.

HOW TO GET TO THE DOLMENS OF ANTEQUERA

The Torcal de Antequera Natural Park is located 54 km from the centre of Malaga. To reach the Archaeological Ensemble of the Dolmens of Antequera by private car we must access through the only access for vehicles, which is located at Km 42 of the A-7075 road.

There we will see the sign to turn off for the Torcal Alto Visitor Centre, in a location between the town of Antequera and Villanueva de la Concepción.

On arrival there is a parking area with limited capacity. If this level is full, you should park in the lower car park on the side of the A-7075. In the latter case, you can access the Torcal Alto Visitor Centre area by footpaths, or take the shuttle bus, which costs 2€ return.

If our idea is to get to the Dolmens of Antequera by public transport, you should know that there are no public companies that reach the site. In this case, we could reach the town of Antequera by bus and, from there, take a taxi at a special rate. You can also get there from Malaga directly by hiring one of the private tours offered by travel agencies.

Access to the Antequera Dolmens Archaeological Site ends thirty minutes before closing time. It is recommended that if you wish to take a guided tour for individuals or groups, this should be done in advance.

It is recommended to wear a hat, comfortable clothes and trekking shoes, as we will be in a rugged and rocky area. Do not forget to bring sunscreen.