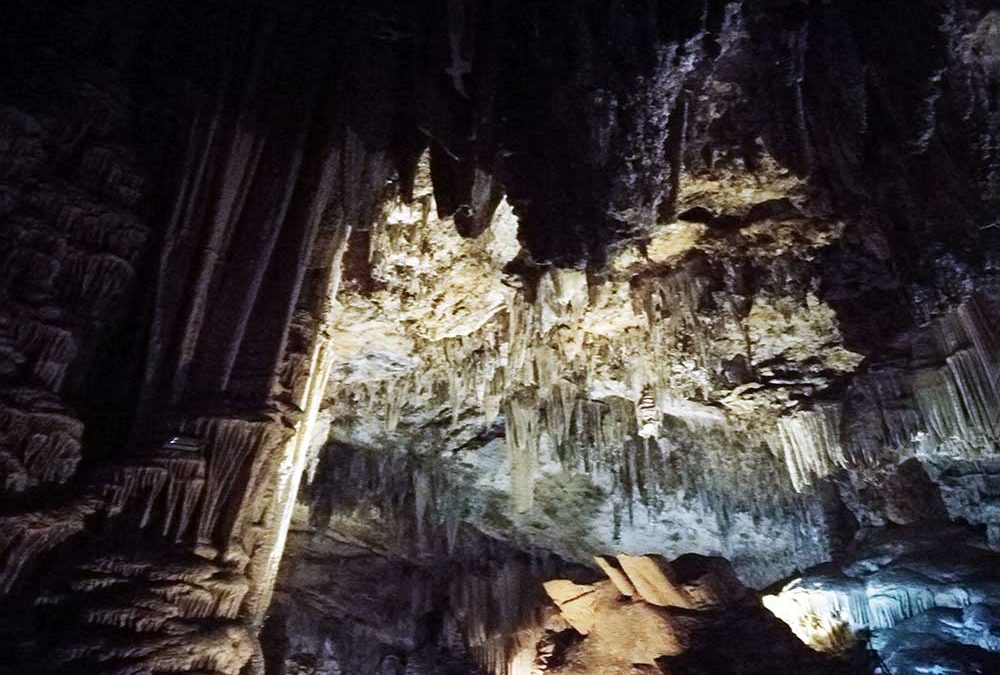 It’s time to tell you about one of the best tourist destinations Malaga for its originality, beauty and cultural heritage. We are talking about the Caves of Nerja, a natural wonder located in the easternmost part of the province, next to some of the best beaches in Malaga. It is located 158 metres above sea level, 4,823 metres long and a success story that has made it the most visited natural monument in Andalusia.

A story that, by the way, celebrated the 60th anniversary of its “discovery” in 2019. For this event, a series of activities such as concerts, videos and workshops were held, with the presence of the modern discoverers of the caves.

The visit to the caves of Nerja will allow you to learn more about the prehistoric inhabitants of the late Solutrense period and the cave paintings that occurred in this particular enclave on the coast of Malaga – giving as an example the famous seal paintings dated at least 20,000 years old.

The entire interior tour has an ‘audio guide’ device, which also includes other technological features such as infographics and images. In this way we can discover the galleries step by step during the approximately 45-minute tour.

Although the Caves of Nerja have three different galleries: Tourist or Lower Galleries, Upper Galleries and New Galleries, only the former will be accessible to the general public. For conservation and accessibility reasons, the other galleries are currently closed for tourist purposes.

When were the Caves of Nerja discovered?

The discovery of the caves could have been taken from an episode of the TV series “Verano Azul” in which some children stumble upon caves that hold countless mysteries. And the real story is not too far off the mark.

On 12th January 1959, a group of five boys: Francisco, José Luis, Miguel, Manuel and José, entered the area known as “La mina del cementerio” (the cemetery mine) attracted by the sound of bats, and ended up in what is now known as “la Sala de la cascada” (the waterfall room).

News of an enormous cave with incredibly beautiful stone formations soon spread around Nerja. On 19 April of the same year, an expedition was organised in which the young photographer José Padial recorded the grandeur of this prehistoric cave. The publication of this report in a local newspaper reached governmental authorities.

On 12 June 1960 – after several months of intense work – the caves were opened to the public with a ballet performance with orchestra. This was to be the seed of what would later become the International Festival of Music and Dance, which every year brings together a fantastic programme of national and foreign artists in the Caves of Nerja.

Although the Music Festival has traditionally been held in the area of the interior galleries, for conservation reasons it was moved to the upper open-air area.

Why are the caves of Nerja important?

The caves contain fossil remains and domestic life dating back up to 24,000 years, making it one of the main prehistoric sites on the Spanish coast. Many of these remains, including ceramics and household tools, are on display to visitors in the Nerja Museum.

Its incalculable natural value has led this enclave in Malaga to be declared a site of cultural interest since 1985, and a place of international geological interest, on a par with other major Spanish tourist attractions. It is also worth highlighting the beauty of the cave due to the large number of speleothems such as stalactites, stalagmites, columns, gours and macaroni.

In fact, the caves have in their Cataclysm Hall a Guinness World Record column, the largest stalactite in the world at 33 metres high and with a base of 13×7 metres.

And although they are not known to many people more than the famous seal paintings, the truth is that the Nerja caves have 589 cave paintings from the Upper Palaeolithic, some of them in a perfect state of preservation.

Since 1999, it has had a research institute staffed by technical specialists, who are responsible on a daily basis for ensuring the conservation of the site by analysing factors such as humidity, temperature and gas concentration in the air.

Tickets for the Caves of Nerja

When it comes to visiting the caves of Nerja, you should know that there are several options for your visit.

As mentioned, the tour lasts about 45 minutes, with an audiovisual projection beforehand.

There are also two types of special visits.

Timetables of the caves of Nerja

The Caves of Nerja are open all year round, with the exception of 1 January and 15 May for the celebration of the Pilgrimage of San Isidro, patron saint of farmers and of Nerja.

The Museum of Nerja

It is worth reminding all readers that they can learn more about the culture of the ancient settlers of the Malaga coastline at the Nerja Museum, which is located at Plaza de España de Nerja, nº 4. Like the caves, it is open 363 days of the year, with the exception of 1st January and 15th May.

The museum belongs to the Caves of Nerja Foundation, whose aim is to make the virtues of this natural wonder known to all visitors. Inside you can find ceramics, necklaces, domestic tools, as well as videos and didactic panels with material about the historical periods documented in the municipality of Nerja, from the Palaeolithic to the tourist boom of the 1960s.

The entrance fee to the Nerja Museum is 3€ for adults and 2€ for children between 6 and 12 years old. Prices may vary depending on the season.

Near Frigiliana and La Alhambra

The caves of Nerja have the added bonus of being just 10 minutes from the town of Frigiliana, considered one of the most beautiful villages in Spain. It is also just an hour from the Moorish palace of La Alhambra in Granada. This makes it an ideal tourist attraction for those who want to visit Nerja and Frigiliana (from Malaga) or the caves from Granada.

In future posts we will recommend tours and routes to make these sightseeing tours easier for you. In the meantime, stay tuned!