🔥🐟 The best espeto in Malaga 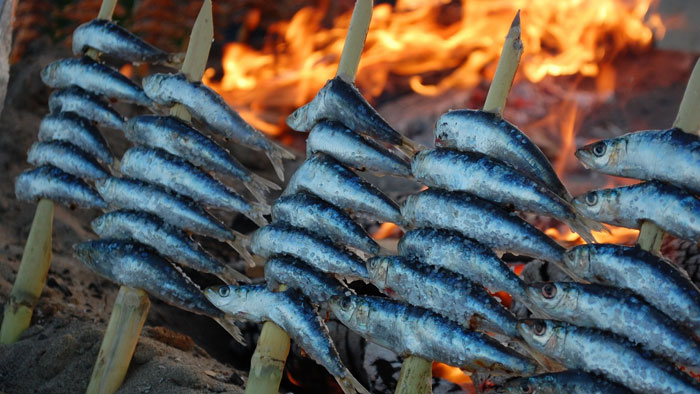 The traditional Malaga sardine espeto has become over the years an international dish that has managed to become a symbol of the city and Costa del Sol. So that you do not remain with the desires to prove it, and now that the good weather arrives, we show you where to eat the best sardines of Malaga and province during this 2020.

The espeto is to Malaga what the potato is to the spanish omelette. That is undeniable. A dish that is inseparable from the gastronomy of Malaga, which is gaining more and more followers every day thanks to the smoky touch provided by the embers on which it is cooked and which cannot be missing from any of the beach bars in the capital and province.

At a time when saturated fats and fast food are gaining ground in Spain’s major capitals, it’s a good thing that an oily fish like the sardine is positioning itself as a healthy and nutritious alternative. The sardine has Omega 3 fatty acids, phosphorus, selenium, vitamins B12, B6 and D as well as iodine or niacin, which makes it a perfect food for sportsmen or lovers of healthy living.

How do you prepare a espeto from Malaga?

Prepare a espeto is really simple. All you have to do is ‘espetar’ (stick it into a reed or sharp metal) a string of fresh sardines and let them cook over the heat of the embers. Traditionally, on a beach sand stand in the shape of a small boat.

The next step is to season them with a little coarse salt served with a good ice-cold beer or a glass of white wine. Unbelievable!

Is it better to eat the spits the months that don’t have R?

One of the best known sayings of the people of Malaga is that the best time to eat espetos is in the months that do not have the letter “R”; that is, from May to August, coinciding with the temperature increases on the Costa del Sol.

The explanation for this statement has a scientific basis. Coinciding with the hot months in the surface waters of the Mediterranean Sea, plankton growth develops and becomes present in the habitat of different species of fish.

The sardine assimilates the plankton through its gills and the water that enters through its mouth, feeding on the phytoplankton and the zooplankton that is composed of dinoflagellates and diatoms. Thanks to this overfeeding is that the sardine increases its fat reserves and fattening covering your body properties that enhance their flavor.

Once the summer passes and the heat decreases, the sardine keeps its fat reserves for the reproduction that will come in winter, where it usually loses these surpluses in the spawning. It is usually said that the best season to eat sardines is after June 23rd, coinciding with the Night of San Juan, when the sardine has the greatest amount of this fat.

Remember that in Malaga we have good weather 300 days a year and it is always a good time to sit in a beach bar and watch the sea with a plate of these delicious sardines!

The 5 best espeto restaurants in Malaga

In Malaga city and province there are hundreds of places to eat a good espeto. In a recent award in 2017 organized by the local newspaper Sur to decide what was the best espeto in the province, up to 96 locals participated.

But we don’t make you wait any longer. Here we inform you about the 5 best restaurants and bars where you can eat the best sardines in Malaga.

El Tintero is one of the classics of this type of listing with a sardine espeto on a plate that serves generously and with a good size of six units. El Tintero also stands out for the way it serves the dishes, where the waiters pass by the tables singing the different dishes they take out of the kitchen.

If you hear: “Espeeetos, traigo espeeetos” (I bring you espetooos), just raise your hand and wait for the dish to be left on the table. The restaurant is located at the end of the El Palo beaches and it is usually crowded in high season, so it is better to be careful and to go early.

Between the beaches of El Palo and Pedregalejo we will find an old acquaintance of the Malaga espeto, Miguelito el Cariñoso, another of those premises of reference that has positioned itself in the lists of the best espetos of Malaga thanks to the good work of its managers and the tradition that takes the restaurant to its backs.

The espetos are prepared behind the beach stall on the Paseo Marítimo and are medium sized with a good taste of salt and lemon. The Pedregalejo Beaches are a must.

Leaving the beaches of the capital we arrive at Torremolinos, where the espeto is also a religion for dozens of locals who stand by the Mediterranean Sea. Without a doubt, one of the best known is El Canarias Playa, which also won the aforementioned prize for the best espeto in 2017.

This establishment opened its doors in 1962 and is located on the Paseo Marítimo de La Carihuela. Besides the espetos it has a great assorted variety of fried fish. Which is the secret of its espetos? According to José Pérez, one of its owners, without a doubt the hand of his espetomaker Sergio, a raw material of great quality, and olive wood.

If we move further east past the beaches of El Palo, we will reach Rincón de la Victoria, where the 2.50 EUR five-espeto dish of El Deo del Rincón has become a landmark in the area. This chiringuito has a great location in the Paseo Marítimo of the town of Malaga and is very easy to reach from the center of Malaga by car or bus.

To cook the best espeto of Malaga the ideal time of cooking must be – according to the espetomaker of El Deo, Francisco Vega – in the eight minutes on each side of the spit, making the sardine gild well without bringing it too close to the fire. With a good quality of the genre the good espeto is assured.

We return to the central area of Malaga to move to another of the classics of espeto: the Chiringuito Maria, which in addition to the popular coastal dish, is known for its rice, paella and its rations based on fried fish.

The restaurant, which dates back to 1947, is located on the Antonio Banderas Promenade and is one of the most renowned chiringuitos by the people of Málaga. This chiringuito has been attended by all kinds of personalities, such as Antonio Banderas himself or the singer Julio Iglesias. Espetos are one of its star dishes, as there is a lot of love and family heritage behind the embers of its sands.

In the following post we will tell you about the origin of the espeto, what types of espeto exist (squid spit, rose spit), which Spanish king had a hand in its establishment on the Malaga coast, and what we can marinate with this simple but spectacular dish of southern gastronomy. Enjoy!

In this post I want to let you know what are the best Indian restaurants in Malaga and province, a cuisine that may not be as rooted in Spain as Italian, Japanese or American, but it is really good, so if you have not tasted it, I recommend it. On a side note, you may...
Read More

The best Japanese restaurants in Malaga

Japanese food, and especially sushi, is the food that has aroused the most expectation in the last decade. Japanese cuisine is all the rage and we can see it in the number of restaurants we find, especially in city centres. Unlike other types of food we have talked...
Read More

If we think of international food, we are sure that one of the first three we have imagined is Mexican, a classic in gastronomy. For this reason we want to make a post to tell you which are the best Mexican restaurants in Malaga, where you will discover the authentic...
Read More

As we have talked about in other posts, gastronomy is a very important pillar in Malaga, which offers millions of tourists who visit us a lot of alternatives to enjoy. One of the most popular is Thai food, which is why we find a large number of Thai restaurants in...
Read More

Where to eat hamburgers in Malaga

If we talk about the styles of food that have undergone the greatest transformation, hamburgers would be among the first, because they have gone from being considered fast food to being authentic delicacies with high quality products, so I dedicate this post to...
Read More

In this post I want to show you which are the best Italian restaurants in Malaga, so you can enjoy delicious dishes with authentic traditional flavour. When we think about where to eat, one of the best options is always to go to an Italian restaurant, because who...
Read More

The best Russian salads in Malaga

Who doesn't enjoy tasting a good Russian salad and the first thing they look at the menu is to see if they have any to order? This dish has become an attraction for any customer who is going to eat, whether it is tapas, meat, espetos or in a seafood restaurant, as it...
Read More